Help For The Shy Networker 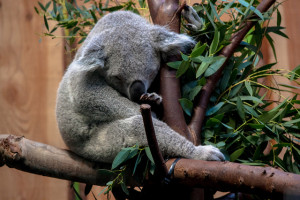 When I was a kid, I was so shy around strangers that my mom would give me “anti-shyness” exercises.  She would make me go up to the check-out register and pay for things myself. Then I had to make telephone calls to businesses, asking for information. I thought it was child abuse, but it must have been just what I needed, as the shyness ultimately evaporated.

Even if you’re not shy, it is common to have some resistance to networking.

A lot of highly intelligent, capable people freeze up with the thought of asking others for assistance.  The voice of resistance speaks:

“I don’t want to be wasting anyone’s time.”

“What if they don’t want to talk to me?”

“People ignore my attempts at networking!”

“You don’t have to be the schmoozer”, says Ferrazzi. “The problem with the schmoozer’s approach to networking is that he doesn’t have the right intent:  He’s not interested in helping other people-only himself.  Be the authentic, aw-shucks, humble shy person you are. It can be endearing. Don’t try to be something you’re not,” advises Ferrazzi.

While you may need to encourage yourself to be a little more out-going, you don’t have to be artificial.

Here are 6 more tips to get you motivated:

1. Realize That You DO Have Something to Offer Others
All of these actions benefit the other person:

2. Don’t Apologize
There is no need to apologize to others for wanting to build a relationship with them. If you are polite and respectful of their time, it’s not an imposition. Apologizing can make you appear timid and lacking in confidence.

3. Try Role Playing to Gain Confidence
This is something I do with my clients to break through the fear of rejection. I pretend I am the person they want to contact, and I role-play various responses they may receive, from disinterested to welcoming.  When they get my aloof response, they know it’s not personal, and their confidence increases.  It sounds silly, but it really works and is fun to do with a spouse or friend.  No one around? Grab a mirror and practice!

4. Be Prepared
Know ahead of time what you want to say about yourself. How could you describe yourself in a compelling way? Use words that paint a memorable image in the other person’s mind. Have a list of questions, both general and specific to draw upon in conversation. Being up on current events and having some personal interests to talk about can be helpful during more casual conversations, such as mealtime during a conference.

5. Show Appreciation and Follow-up
Keith Ferrazzi says the majority of people fall down in networking by failing to follow-up. Don’t waste all of your efforts by neglecting this most important piece! Make it a rule that you follow-up via email, or a thank-you note, within 24-48 hours. When you return from a networking event, follow through with any promises to send resources, such as an article.

6. Create a “Networking Spreadsheet”
An Excel spreadsheet will come in handy to keep track of your contacts. When you want to contact someone 6-12 months later, you can remind yourself where you met, and a few specific things about your acquaintance. This will help you to feel even more comfortable in your next interaction.

But most of all have fun. If you read Keith Ferrazzi’s book, you will see how enriched his life is by all the connections he makes through networking. By his own admission, he goes WAY OVERBOARD, but he loves it.  And if you don’t already, I think with the right approach, you could feel some of that love too! 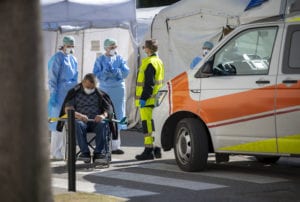 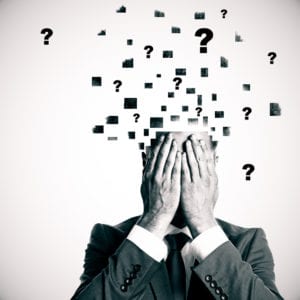 Is this three-letter word shutting your brain down? 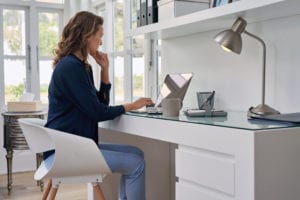 Find what you're looking for: 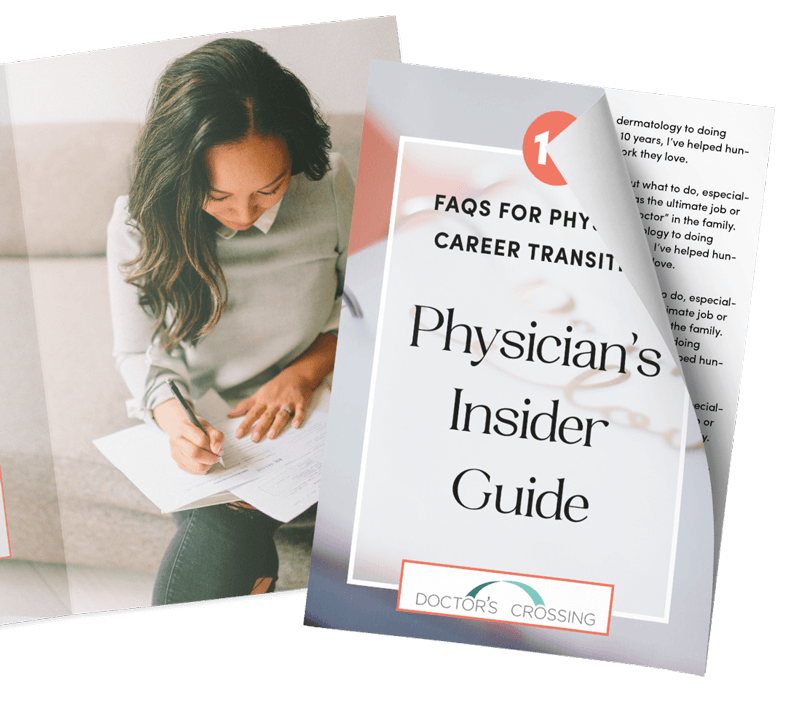 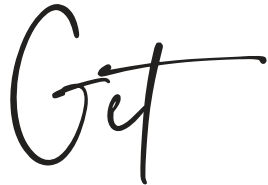 15 of the most common FAQs on physician career transition

Sign up below to get the resource to jump-start your career transformation! You will also receive the latest blogs and updates from Heather.

“The coaching I have had with you has been life changing."

You helped me find the courage to seek out leadership positions and become a medical director as well as a physician advisor. I am grateful we crossed paths and am a different person because of it. You have inspired me to "believe" in spite of my inner skeptic. I consider you one of my most important mentors and am proud to also call you a friend. This says a lot given the apprehension I felt when I took a chance with our first coaching session. Even though I have already made a successful transition, I still value your ongoing mentorship and can enthusiastically attest that the value of your services is tremendous!

“I was at a crossroads in my medical career. I asked myself, "Do I stay or do I go?"

I met Heather at the SEAK conference. She and I revisited this question.  Did I want to quit being medicine completely? She helped me to identify my needs, wants, and my vision for my FUTURE, not just in medicine, but in life!!!

She was able to listen to my "ramblings" about becoming a stand-up comic, lounge singer and voice-over actor and translate them into action steps.  I chose to become a composite of all of these. Now I am a more confident, healthier, happier person. I credit this in its entirety to the tutelage I have received and continue to receive from Heather.  She cares. She listens. She was there for ME.  She will be there for YOU!

“I am forever grateful to Heather for helping me to recognize, I am more than just my M.D."

Heather helped me understand that I am more than just a doctor and that my experiences in clinical medicine are valuable in so many arenas.  As a result I realized that there are other ways to use my background, still be able to help people and continue to challenge myself and grow.  To that end I discovered coaching - specifically health coaching.  I am on my journey becoming a health coach and truly loving it!

“Thank you, Heather, for helping me transform my career, my faith and my life."

What started out as an initial thirty-minute consultation call turned into an amazing four-year journey that transformed my life, personally, spiritually and professionally.

Heather helped me to discover my passions...by doing so, I discovered I still had a calling for medicine but it now came from a place of truth...

Today...my wife and I are opening our first concierge medicine clinic in a community we love. I’m actually excited to have the opportunity to practice medicine the way I believe it’s meant to be, with a focus on the doctor-patient relationship and an emphasis on faith. I know if I had not reached out to Dr. Fork, my life would not be where it is at today.

“Heather gave me the confidence to create a new livelihood by following my heart."

She is incredibly knowledgeable about the range of careers available to physicians and provided me with advice and connections which I would not have found on my own.  From the start she encouraged me to step out of my comfort zone and try different things.  I was laid off unexpectedly in early 2017, and Heather gave me the confidence to create a new livelihood by following my heart and making decisions based on trust, not fear.  Now I am enjoying working part-time in a clinical setting in addition to teaching and writing.

“After months of struggling to find a non-clinical career that matched my values and passion, I stumbled upon Heather's website which truly changed my life."

Heather's insightful and personalized approach to career coaching made me think outside the box since she took the time to evaluate my personality, values, interests, and preferred lifestyle.

Through her encouragement, practical advice, and professional connections, I was able to find a non-clinical position at a state Medicaid agency that aligned with my passion for population health and serving low-income communities. In addition to her coaching sessions, Heather has built a community of like-minded physicians through her blog, and I feel honored to recommend her to friends and colleagues who seek to make positive changes in their professional and personal lives.

“Working with Heather ultimately helped me leave my job in corporate healthcare and find a path that was much more fulfilling."

My career was going reasonably well but I couldn’t shake this nagging feeling I could do better; or at least find a better long-term career fit.

I was able to find a surgery job that better aligned with my goals and professional interests.  Additionally, Heather helped me start a consulting business which has allowed me to pursue a true passion: helping medical students, residents, and attendings surgeons navigate the challenges of high-stakes standardized exams.

If you are reading this as a “Type A” surgeon who doesn’t think coaching is for you, I would encourage you to give Heather a shot.  I’m very glad I did!

“I gained the confidence in myself to develop an action plan that blended the best parts of my experiences and interests into a cohesive career."

Through our work, I learned to trust myself to make good decisions for my own future – something I hadn’t realized I was struggling with because as an emergency physician, I make life-changing decisions with patients every day.

By feeding my creativity and interests in other realms of my professional life, I’ve found renewed compassion for my patients and myself, making every shift an opportunity to actually care for people. Thank you Heather. I really couldn’t have made these changes without your help!

“The simple truth is - Heather Fork totally helped me change my life."

I never would have had the courage to make the changes I’ve made without her unwavering support, wealth of knowledge and commitment.

When I first started working with Heather, I was downtrodden...I’d been practicing medicine for 20+ years and yet had never quite found my place.  During the first year I worked with Heather, I left the practice I’d been working at, and recreated an entirely new professional purpose.

I’m now an executive and leadership coach, a university professor, and a Brené Brown Daring Way facilitator, and I have never looked back.  I love what I am doing more than at any other time in my professional life and I credit Heather with seeing in me what I was never able to see in myself, until now.

Don’t hesitate, don’t doubt yourself, schedule your time with Heather as soon as possible- she can help you reconnect to your purpose and reinvent your life.

"After 30 years in academic medicine, I wanted a career change but had no idea where to start. Medicine was all I knew."

I signed up for coaching with Heather and it transformed my life. She helped me get clear on what I wanted my life to look like. We reviewed my skills, values, and strengths. She instilled hope in me that change IS possible after 50 years!

The outcome is that I have created a life I love! I practice endocrinology part-time and own a life coaching business! Coaching with Heather is one of the best investments I have made in my life.